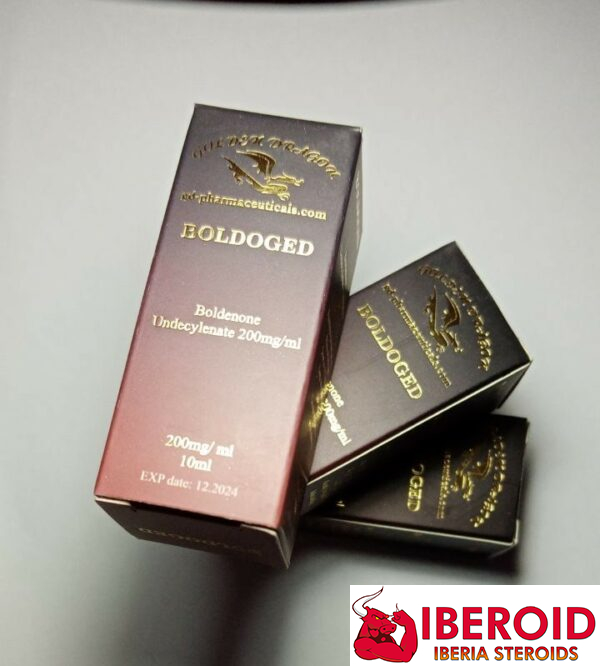 BOLDOGED (Boldenone Undecylenate) is a structurally altered form of testosterone. It is a very slight change in an added double bond at the carbon one and two position. This double bond greatly reduces the hormone’s androgenicity, as well as estrogenic nature. It is then attached to the very large or long Undecylenate ester, which is responsible for controlling the release of the hormone once administered into the body. The Undecylenate ester allows for a peak release in Boldenone approximately 3-4 days after injection, with a slow continuous release of the hormone to follow for approximately 21 days.

Due to its structural change, BOLDOGED only aromatizes at approximately 50% the rate of testosterone. Estrogenic side effects are possible, but the odds are highly in the individual’s favor compared to testosterone. It is not as powerful of a mass builder as testosterone, not even close, but the reduced estrogenic activity should allow the individual to make cleaner gains through supplementation.

BOLDOGED shares many similarities regarding direct enhancement properties with testosterone. Common shared properties include its ability to enhance protein synthesis, nitrogen retention in the muscles, inhibit glucocorticoid hormones and increase IGF-1 output. Equipoise is also well known for increasing red blood cell count, a trait shared by most all anabolic steroids. However, issues of concern have been noted regarding how much Equipoise can increase red blood cell count. But available data tends to support this only being a concern with extremely high dose use for extremely long periods of time. In many ways, the increase in red blood cells provided by Equipoise can be fast and rapid, but may not present a significant advantage or disadvantage compared to most anabolic steroids when used responsibly. Without question, a moderate increase in cell production would be very advantageous for most any athlete.

The effects of BOLDOGED are fairly straightforward. This is a generally well-tolerated anabolic steroid that presents notable anabolic activity in most users in a clean and even fashion. Outside of performance enhancement use, Boldenone did enjoy some success as a human grade steroid for a time. The steroid had some success in treating muscle wasting diseases and osteoporosis, but would ultimately give way to other steroidal options. As a veterinarian steroid, Equipoise is well-known for its use in horses, hence the name “Equipoise” and its similarity to the word “Equestrian.” EQ is often given to horses in an effort to increase lean body weight, which is in part due to the steroid’s ability to increase appetite. An increased appetite is well noted among many performance enhancing athletes that use Equipoise, however, it doesn’t appear to affect everyone the same. Many who use the anabolic steroid report no increase in appetite, it tends to be highly individualistic, but it could be useful for those struggling to consume needed calories.

As an off-season bulking steroid, BOLDOGED can add quality lean mass gains, but they will not come overnight, and will fall short of many anabolic steroids. Steroids like Deca Durabolin will produce far greater mass results, as will steroids like Anadrol and Dianabol; however, the latter two are often accompanied by large amounts of water retention. Some athletes have, however, reported stronger off-season gains when BOLDOGED is added to a total off-season stack rather than used as a base steroid. If appetite suppression is an issue, this steroid may very well help you consume the excess calories needed for off-season growth. Of course, while it may not be a tremendous mass building steroid, for some it may produce all the mass they want. Not everyone who uses anabolic steroids is looking for immense gains in size. BOLDOGED is also well-noted for promoting increases in strength. An increase in strength can be very beneficial to an off-season mass plan, but perhaps more beneficial to the enhancement of athletic performance. Unfortunately, the extremely long detection time will prohibit many athletes from using EQ. Total detection time can stretch to five months. However, the steroid definitely provides numerous advantages to the athlete, not only in an increase in strength but a notable increase in muscular endurance. Recovery should also be enhanced. Regardless of the desired purpose of use, all who supplement with BOLDOGED will enjoy these related benefits.

Be the first to review “BOLDENONE / BOLDOGED – 3 pack” Cancel reply

€35.00
Testosterone Mix 250 mg by Euro Prime Farmaceuticals is considered to be one of the key anabolics in the male
Add to wishlist
Add to cart
Quick view
New
Compare
Close

€20.00
Testosterone Enanthate is an anabolic steroid that is slowly released and has a long half-life of 7-10 days. The steroid stimulates
Add to wishlist
Add to cart
Quick view
Compare
Close

€45.00
Testosterone Cypionate is one of the longest active testosterone esters known to date. Its characteristic feature: the drug is excreted
Add to wishlist
Add to cart
Quick view
Compare
Close