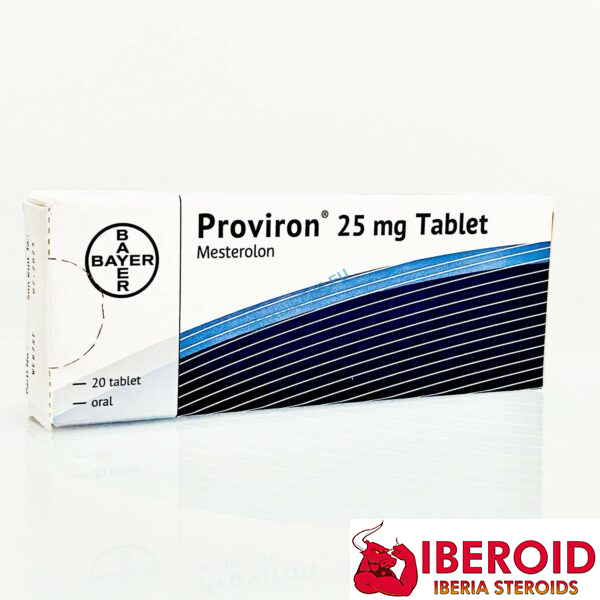 Proviron is an post cycle steroid, this drug contains Mesterolone.

Proviron is used in school medicine to ease or cure disturbances caused by a deficiency of male sex hormones. Many athletes, for this reason, often use Proviron at the end of a steroid treatment in order to increase the reduced testosterone production.

This, however is not a good idea since Mesterolone has no effect on the body own testosterone production but as mentioned in the beginning only reduces or completely eliminates the dysfunctions caused by the testosterone deficiency. These are in particular impotence which is mostly caused by an androgen deficiency that can occur after the discontinuance of steroids, and infertility which manifests itself in a reduced sperm count and a reduced sperm quality.

Proviron is therefore taken during a steroid administration or after discontinuing the use of the steroids, to eliminate a possible impotency or a reduced sexual interest. This, however does not contribute to the maintenance of strength and muscle mass after the treatment.

Some competitive bodybuilders will also add Mesterolone to their pre-contest preparation as many believe that it will improve muscle density and hardness. This could be attributed to the ability of the compound to decrease water retention and reduce the amount of circulating estrogen in the body, similar to many other androgenic compounds. However, as discussed earlier, there are several other drugs that could be substituted for mesterolone that are much more effective for this prupose.

HOW DOES IT WORKS?

This drug is also favored by many during contest preparations, when a lower estrogen/high androgen level is particularly sought after. This is especially beneficial when anabolics like Winstrol, Oxandrolone and Primobolan are being used alone, as the androgenic content of these drugs is relatively low.

Proviron can supplement a wellneeded androgen, and bring about an increase in the hardness and density of the muscles. Women in particular find a single 25 mg tablet will efficiently shift the androgen/estrogen ratio, and can have a great impact on the physique. Since this is such a strong androgen however, extreme caution should be taken with administration.

Higher dosages clearly have the potential to cause virilization symptoms quite readily. For this reason females will rarely take more than one tablet per day, and limit the length of intake to no longer than four or five weeks. One tablet used in conjunction with 10 or 20 mg of Nolvadex can be even more efficient for muscle hardening, creating an environment where the body is much more inclined to burn off extra body fat (especially in female trouble areas like the hips and thighs).

Proviron is therefore taken during a steroid administration or after discontinuing the use of the steroids, to eliminate a possible impotency or a reduced sexual interest. This, however does not contribute to the maintainance of strength and muscle mass after the treatment.

There are other better suited compounds for this like HCG and Clomid. For this reason Proviron is unfortunately cunsidered by many to be a useless and unnecessary compound.

The majority of male users will find that dosing in the range of 25 to 100 milligrams per day of mesterolone will be enough to acheive their desired results. Females most often remain at about 25 milligrams per day, but many have experimented with levels far higher. Due to the active life of the compound, splitting the dosage of the drug so that it can be taken twice per day is beneficial, but the effects of the compound should remain for a full twenty four hours so it is not completely necessary.

Due to the fact that many other compounds are available that are much more potent and effective than Mesterolone for the same purposes, it is seemingly unnecessary to increase a user’s dosage far higher than 100 mgs per day. Instead one would most likely be better served to switch compounds are try a much more potent drug if the desired results are not acheived.

The side effects of Proviron in men are low at a dosage of 2-3 tablets/day so that Proviron, taken for example in combination with a steroid cycle, can be used comparatively without risk over several weeks. Since it is well-tolerated by the liver liver dysfunctions do not occur in the given dosages.

For athletes who are used to acting under the motto “more is better” the intake of Proviron could have a paradoxical effect. The most common side effect of Proviron or in this case, secondary symptom is in part a distinct sexual over-stimulation and in some cases continuous penis erection. Since this condition can be painful and lead to possible damages, a lower dosage or discontinuing the compound are the only sensible solutions.

Female athletes should use it with caution since possible androgenic side effects cannot be excluded. Women who want to give Proviron a try should not take more than one 25 mg tablet per day. Higher dosages and periods of intake of more than four weeks considerably increase the risk of virilization symptoms.

Female athletes who have no difficulties with this drug obtain good results with 25 mg Proviron/day and 20 mg Tamoxifen/day and, in combination with a diet, report an accelerated fat breakdown and continuously harder muscles.

Like any drug, Proviron also is associated with some rare side effects. While the side effects do not occur in all individuals, they are quite disturbing. The side effects include: painful erections, loss of libido, general fatigue, deepening of voice, hair growth, acne, oily skin.

Be the first to review “Proviron BAYER” Cancel reply

€40.00
TAMOXIFEN contains Tamoxifen which belongs to the group of medicines called antioestrogens. It is used to treat breast cancer and
Add to wishlist
Add to cart
Quick view
Compare
Close

€20.00
TAMOXITECH is used to lower the chance of getting breast cancer in women with a higher than normal chance of
Add to wishlist
Add to cart
Quick view
New
Compare
Close

€35.00
Like many other drugs, initially ephedrine hydrochloride was used exclusively in medicine. First of all, it was prescribed to people
Add to wishlist
Add to cart
Quick view
New
Compare
Close

€20.00
Methandrostenolone is a testosterone derived anabolic androgenic steroid. Officially, it is a structurally altered form of the primary male androgen
Add to wishlist
Add to cart
Quick view